We interviewed Juana Gonzales on Saturday, November 21, 2015. Upon arriving and unloading groceries, Juana offered her husband’s help to us while making breakfast and exclaimed, “This is definitely not a macho home!” At this point, we knew that Juana was someone with intense feminist ideals. Juana and her husband, Jesse, were excited to show us everything they owned related to the Chicana and Chicano movement. We were really surprised to find that Jesse was a collector of Chicano items such as movie posters, photographs, books, and pins. Jesse, like his wife Juana, was heavily involved in the movement and they actually met through Juana’s sister and their involvement with the movement. 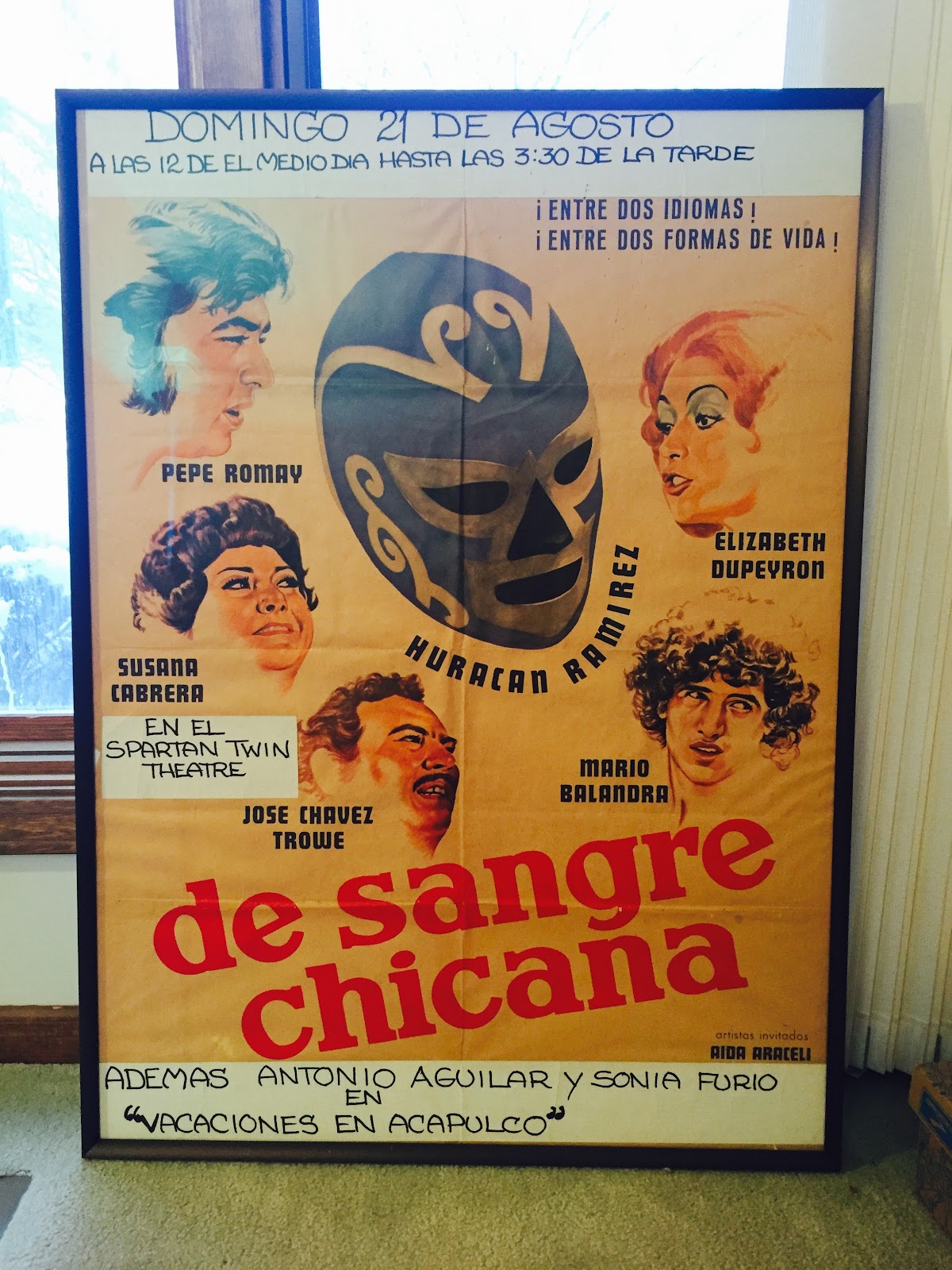 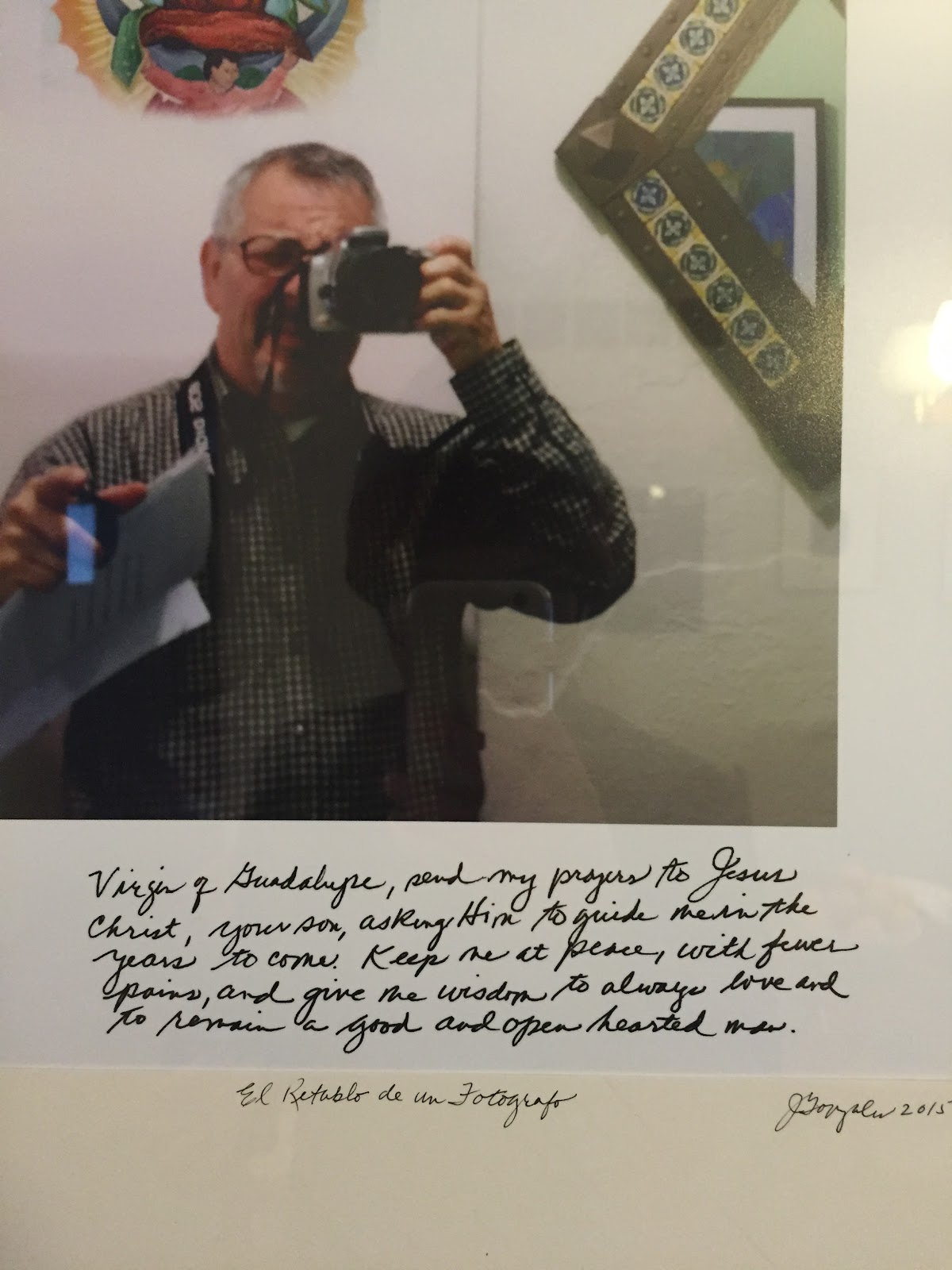 Setting up for the interview seemed daunting at first, but Juana had a living space that was practically perfect for our interview. A sectional couch offered a spot for Juana to sit and a spot for Professor Cotera to be able to face her perfectly. Setting up the camera and lights went smoothly, although we had to face the light towards the ceiling so that it was not blinding Juana and not as reflective. We were having complications understanding whether or not the Zoom Recorder was recording properly. After fiddling with it, we thought we had it figured out. However, it appears that the Zoom did not save the sound files from the interview.

Juana is the second oldest of eleven children in a strictly Catholic family. She moved to Michigan in her twenties to help look after two of her siblings who started college at Western Michigan University. Prior to moving to Michigan permanently, Juana and some of her siblings lived in different parts of Michigan and Wisconsin as migrant workers. Juana became very involved with groups in Kalamazoo, including Planned Parenthood and a Chicana feminist group. It was apparent to us that Juana has always been very open about identifying as a feminist, unlike many of the other Chicanas that we have learned about. She remained very involved in organizing and fighting for equality until the end of her career as an elementary school teacher. We were surprised to hear some of her stories about the discrimination she faced throughout her lifetime. One particular story that stuck out was about her and other Chicanos and Chicanas taking over the president’s house at the University of Michigan to demand he address the treatment of minorities. He laughed at them and asked them to clean while they were there!

While Maria, Shirley, and Taylor interviewed Juana in the living room, Katelynn was busy scanning items from Juana’s archive in a separate room. Juana’s husband was even kind enough to put on the Michigan football game against Penn State. Juana and her husband had an impressive collection of buttons from various political and social movements that we scanned and added to our collection. Katelynn also scanned several pictures from Juana’s collection that included photographs from Juana’s childhood, her wedding to Jesse, and her days as a teacher. We also scanned several documents from Juana’s collection including love letters between her and her husband, Juana’s voting card from a women’s organization she was a member of, and an excerpt from a book that included all the organizations Juana was a member of in the 1970s.

After the interview was over, clean up did not take too long. We were able to successfully transfer all the images we took from our interview with Juana to our team’s hard drive, but as previously noted, we had issues with the Zoom Recorder.  We also made sure to get a team picture with Juana. At around 4:30 we departed from Juana’s house. Little did we know that the most intense and terrifying part of our oral history was about to begin. The weather and road conditions were absolutely horrible for our ride back to Ann Arbor. What was supposed to be an hour ride home, turned into a two hour long ordeal of navigating the white out conditions on the road and counting how many cars had skidded to either the median or side of the highway. Needless to say that our group would not have survived without the cool calm nerves of Shirley Rivas behind the wheel as she fearlessly navigated through the snowy apocalypse. 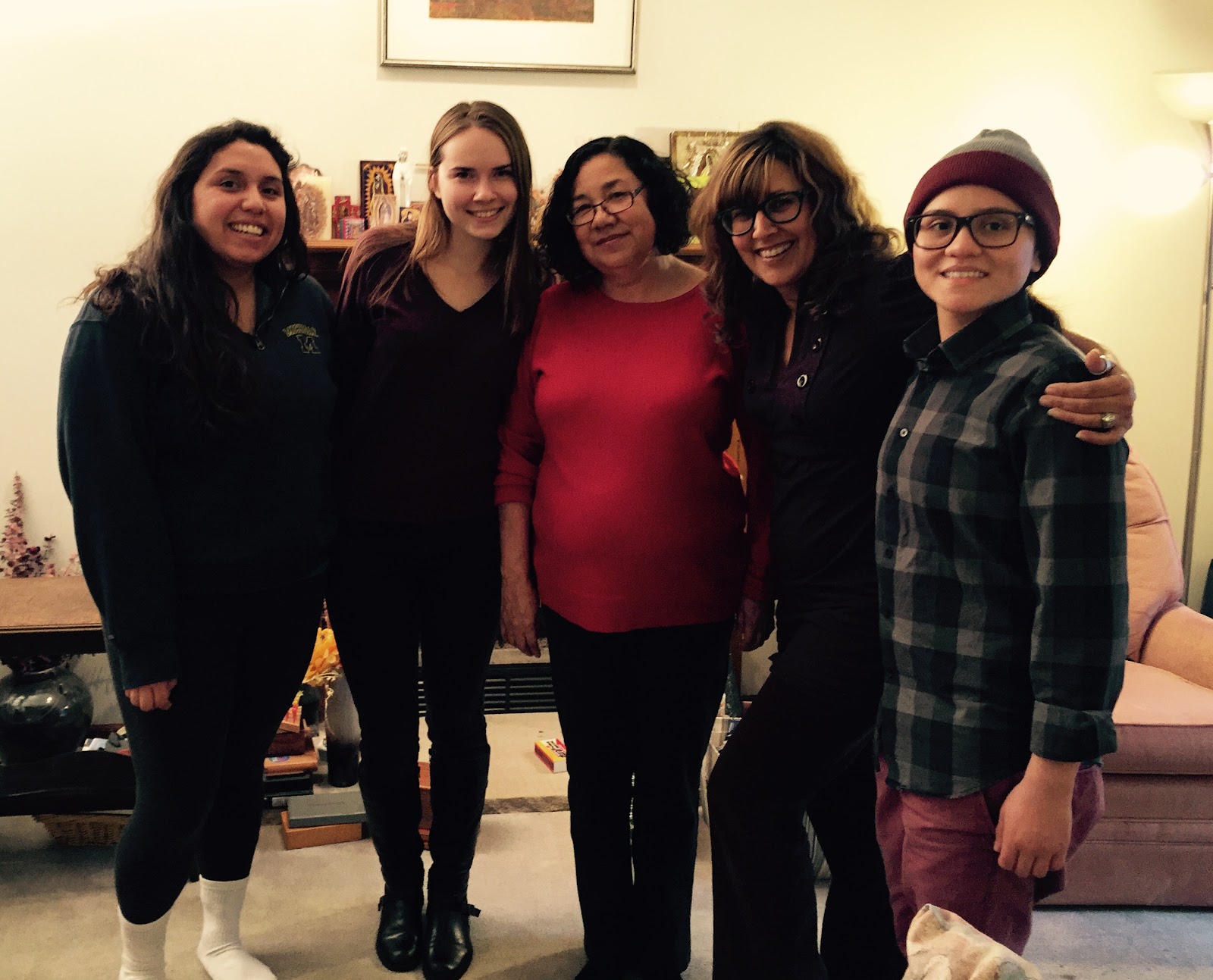 Our group is excited to have finally filmed our oral history, but we know a lot more work needs to be done. In the upcoming weeks we plan on editing the film or our interview into 10 minutes sections, developing Juana’s collection catalog, and writing her final biography for the Chicana Por Mi Raza website.

We had some issues uploading a video clip to YouTube for our blog post, but the videos do exist on our team's hard drive and Taylor's computer.

"I really did not come up with any issues with scanning and taking notes. The notes part was easy. Ramiro synched the timer on his phone with every take, so the notes could have a correct time next to them. I would def recommend trying it. As for the scanner, it was fairly easy to scan all the documents, except we did come up with some issues when documents were awkwardly sized. There were a few documents that we came across that were too long or wide for the scanner. Maria brought with her a clear plastic film that we used to place over the documents (in this case a newspaper article) and we took a picture of it with one of our phones. We also scanned the item in chunks for safe measure. The images we scanned in chunks will have to be stitched together at some point, so for clarity, we used the same item number for each piece (when naming the document to be saved). For multiple images for one document, we named them as follows AR2015_A001, AR2015_B001, AR2015C001, etc. (this is just an example, not an accurate document title but you get the idea). Overall I really enjoyed the interview, it was not only very informative but also emotional and empowering."


"Organizing for our interview was pretty seamless. I prepared all necessary documentation, made sure all film equipment was rented, and re-read the research our group had organized a week prior on Angela Reyes and DHDC. While we were always a little past the scheduled time to begin, our whole time there ended right when we said it would; some things took longer than expected (such as finding a space to film) while others took less time than I had scheduled (setting up lighting and camera). I love how our group blurred the lines of roles and assisted one another with filming, planning, and scanning. That way we each got a taste of what each of us was responsible for.Filming at DHDC was a brilliant idea on Angie’s part. She was able to give us a tour, which is part of her oral history actually, and just hearing about how the idea for DHDC came to be while being in the building was very essential to the way we’d like to curate Angie’s biopage. I was delighted when Angie extended an invitation to return for a dinner sponsored by DHDC. There was definitely a connection made between a Southwest Detroit elder and three young students from Southwest Detroit, which was more than I expected to experience. Angie even gifted me some white sage when I told her that I also smudge for clarity. How amazing and generous is that? As an event recorder, however, I failed to actually take pictures! I plan on using the tour footage to extract some stills as there were shots where we were in the frame along with Angie. It is important to note that we kept remembering and vocalizing that we needed to take pictures, but because we were stationed in one room and filming in another, I think photos kept getting pushed to the end until it was time to go. So, word of advice: write out exactly what needs to be done at the interview and cross it off as you go along."


Posted by Ramiro Alvarez at 7:22 PM No comments: 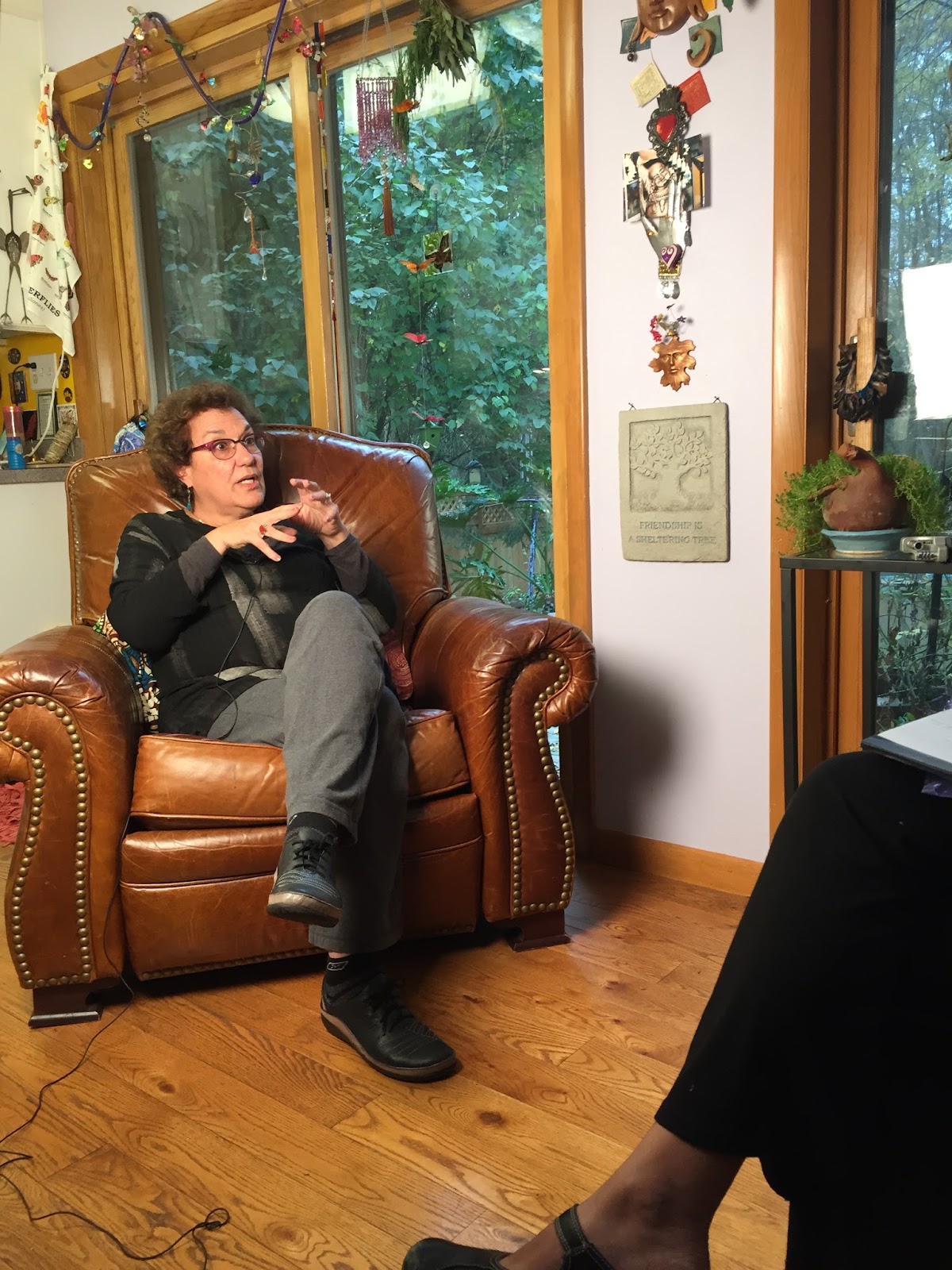 We interviewed Ana Luisa Cardona on Saturday, October 24, 2015. To start, parking was an ordeal, but we managed to fit four cars in a driveway made for two! We began with a tour of the house, then set up our continental breakfast. 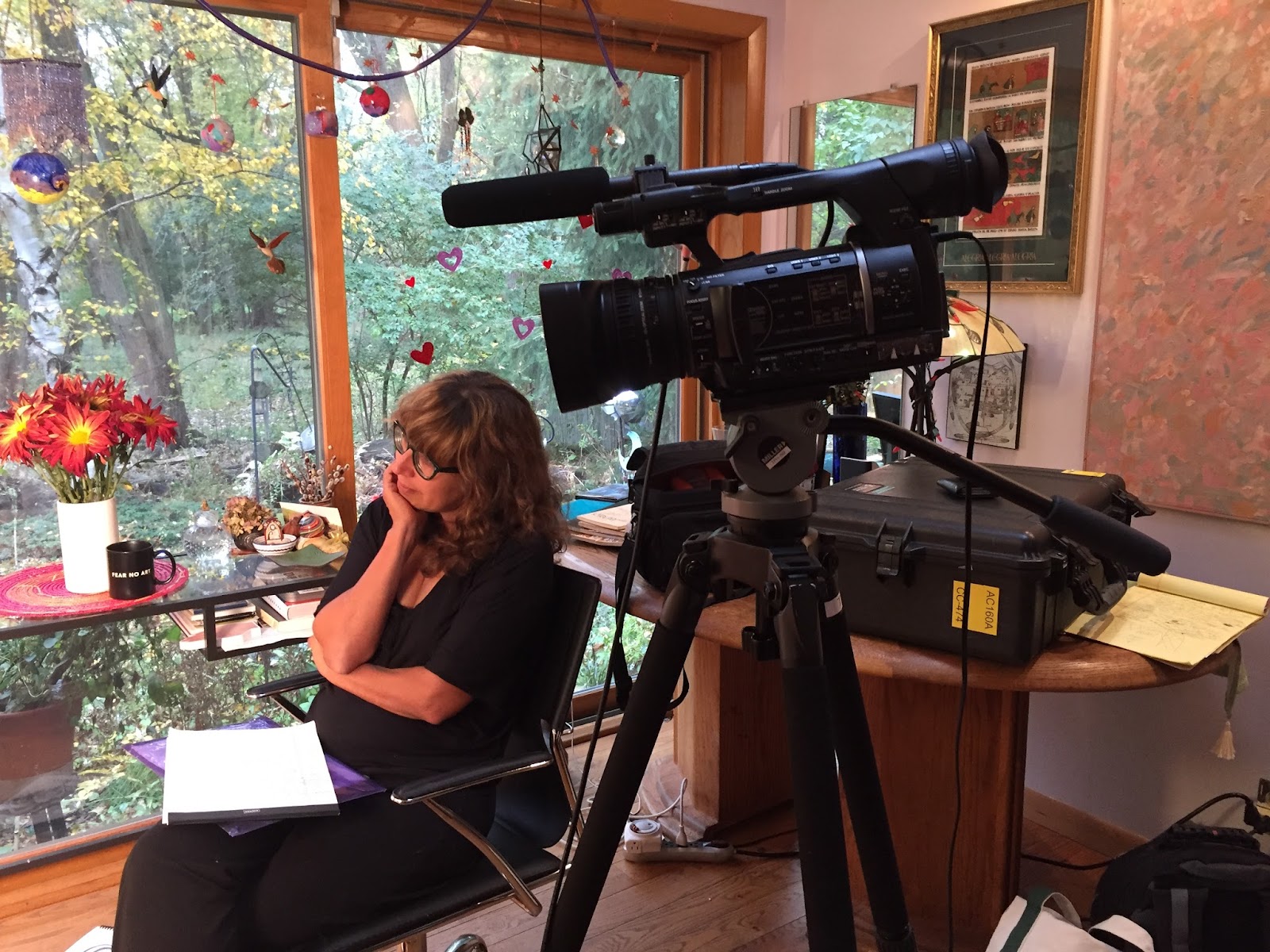 Maria and Ana went to the basement to look at Ana’s archive while we set up the cameras and the lighting in a very small space. Our first issue was working around where Ana would be comfortable, but making sure it wasn’t too comfortable. We also had the opportunity to look at the archive downstairs, but just briefly. After breakfast and adjusting the lighting several times (and downgrading from three-point to one-point lighting), we started the interview.

The two of us were seated on a tiny (noisy) couch, and we couldn’t actually completely see Ana during the interview because of the tight space and set-up. Blake, as the person in charge of the tape log, had to have a second timer running on his slate app because the tight quarters didn’t allow him to see the timestamp on the video. The time passed really quickly and we got a little over two and a half hours of film. 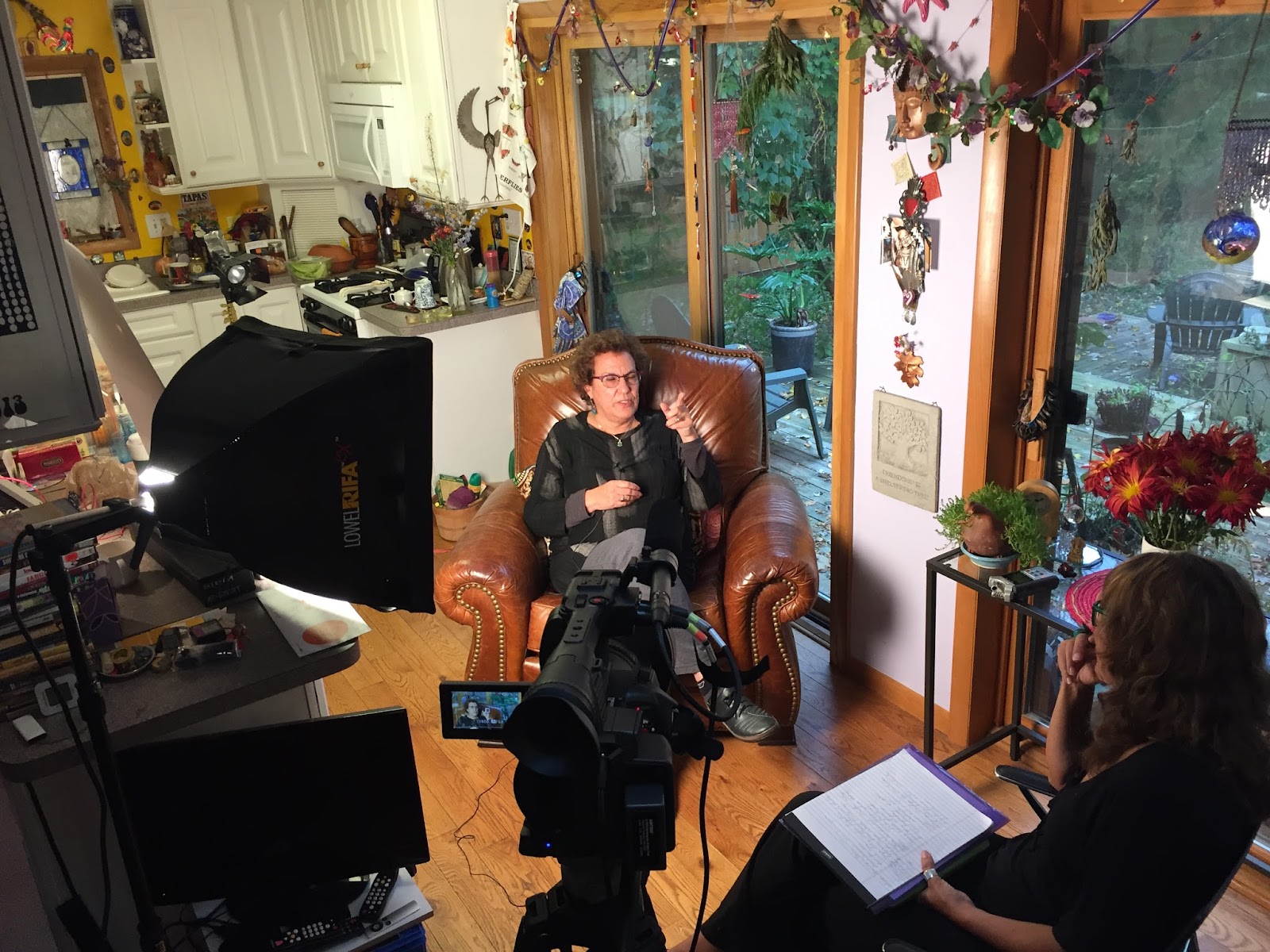 During the interview, Ana made reference to many people with whom we were not familiar. We figured out most of them throughout the interview but it was difficult with all of the names (sometimes just first names) that she was throwing out. She was very interesting and fun to listen to, and when it was all over she said that she was glad that we had done the interview - she’s hoping that once this is out there, grad students won’t barge in asking for follow-up interviews! 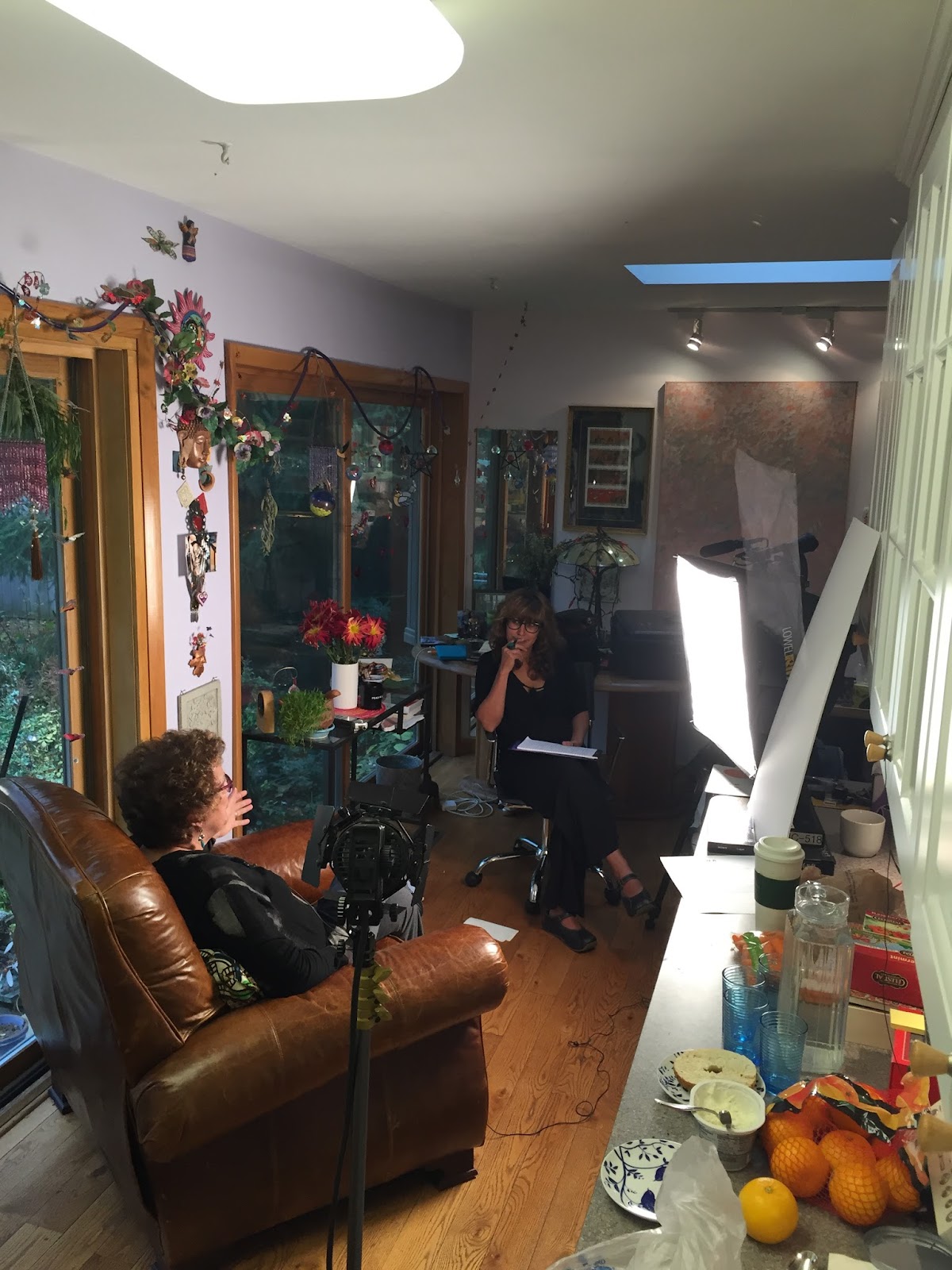 After we finished the interview, it only took us about 20 minutes or so to clean up except for the lighting because it had to cool down. We had a late lunch and got to hear some more stories from Ana. After we straightened up and returned everything that we had moved in her house we packed up the cars and left. It was supposed to rain all day, but it held off until we had to carry the archive outside, then it really started to pour - just our luck! Fortunately, Professor Cotera did the hard work of keeping the box safely preserved in transit. 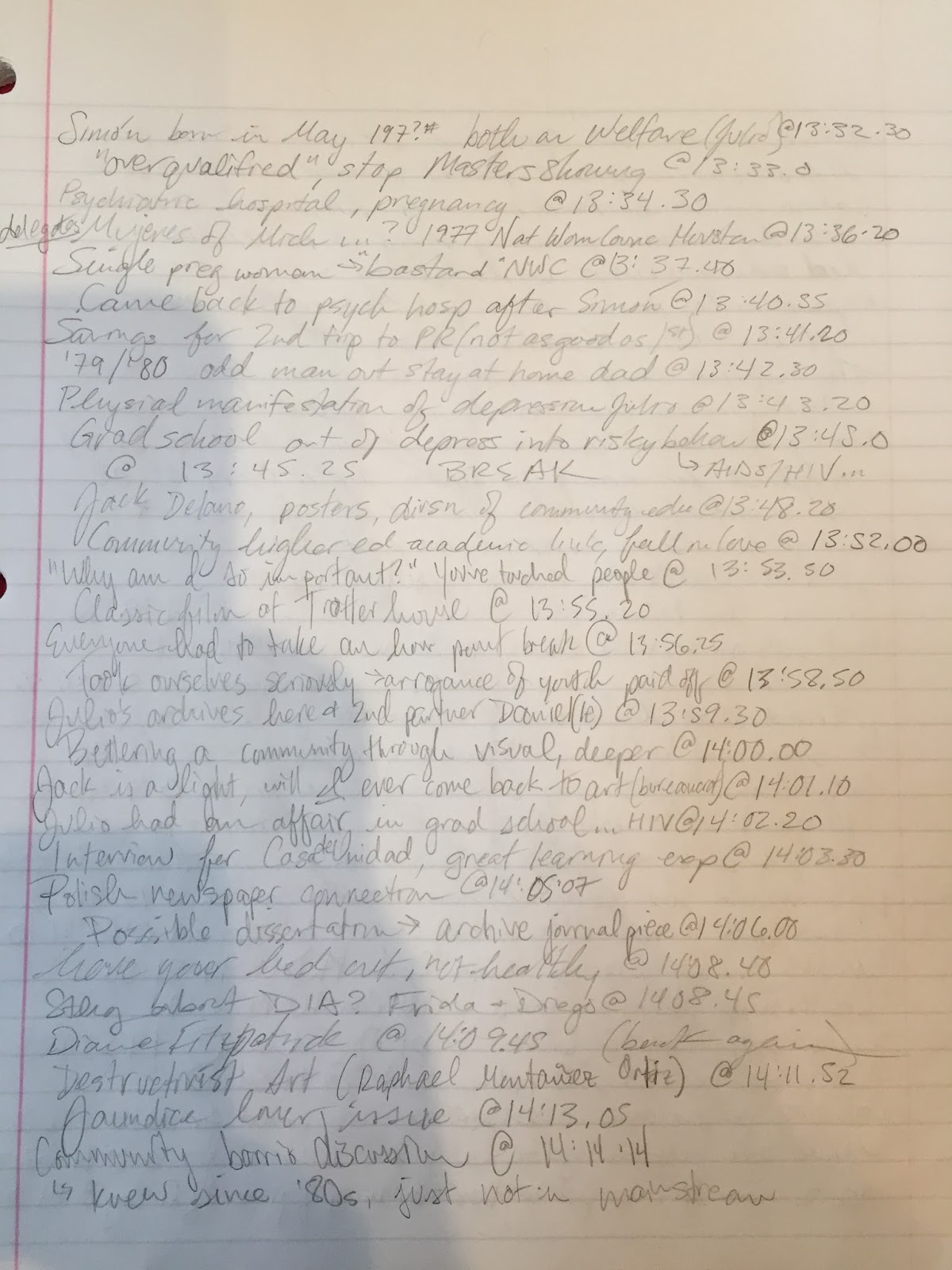 Back in Ann Arbor, we had to transfer the media from the camera’s SD card to a computer and to the external hard drive. This is the scary part, but luckily ours had sound and looked good. Unfortunately, we didn’t set up the zoom recorder correctly so we actually don’t have the backup sound. We’ll explain to everyone how to avoid this mistake! 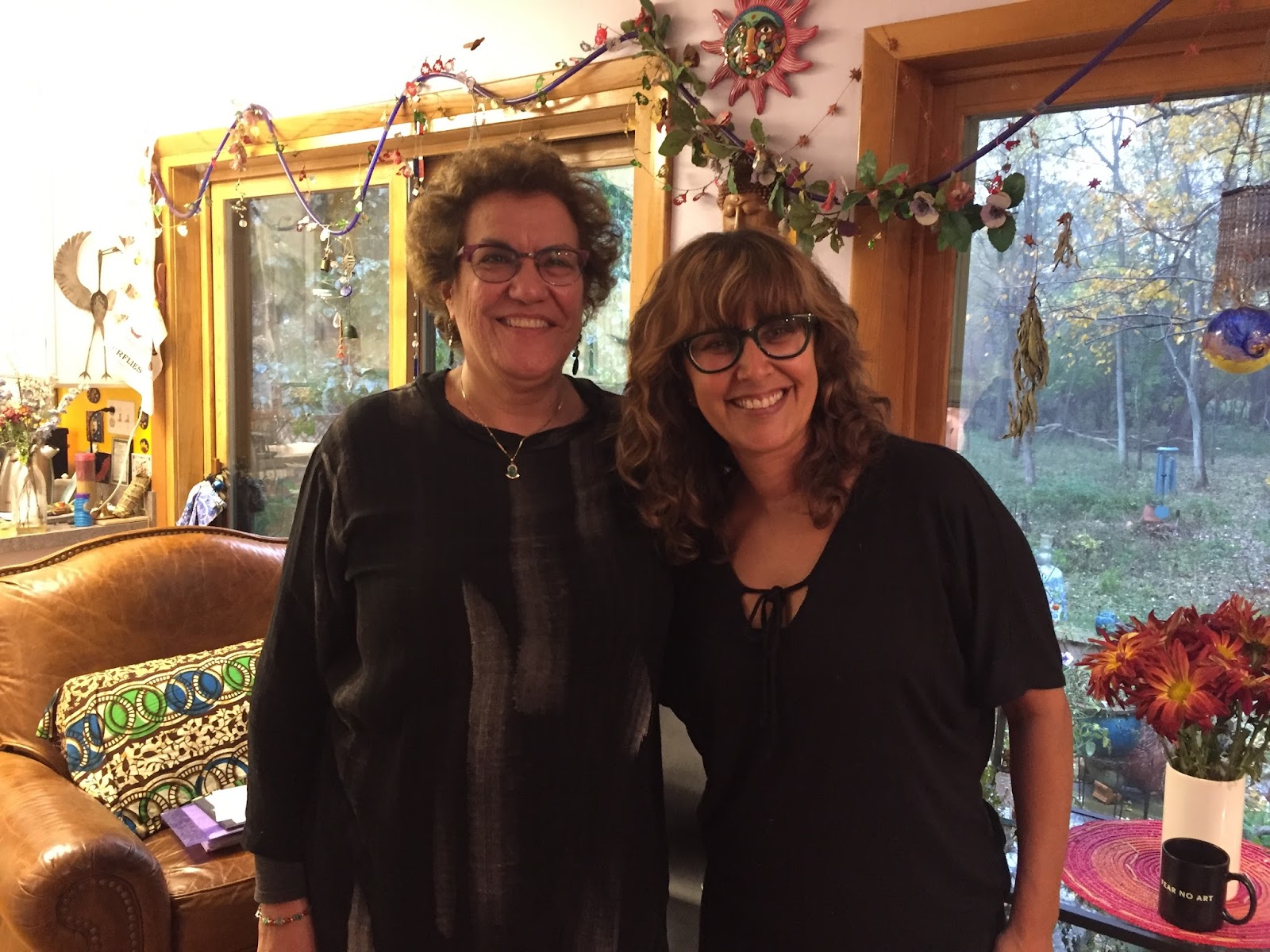 Also, we would recommend using your own SD card so you don’t have to worry about taking it back to the ISS within the three day period where they will immediately erase everything on it. Also, know that it is not physically possible for one person to pick up the camera equipment and the lighting; you need two people to split up the load. 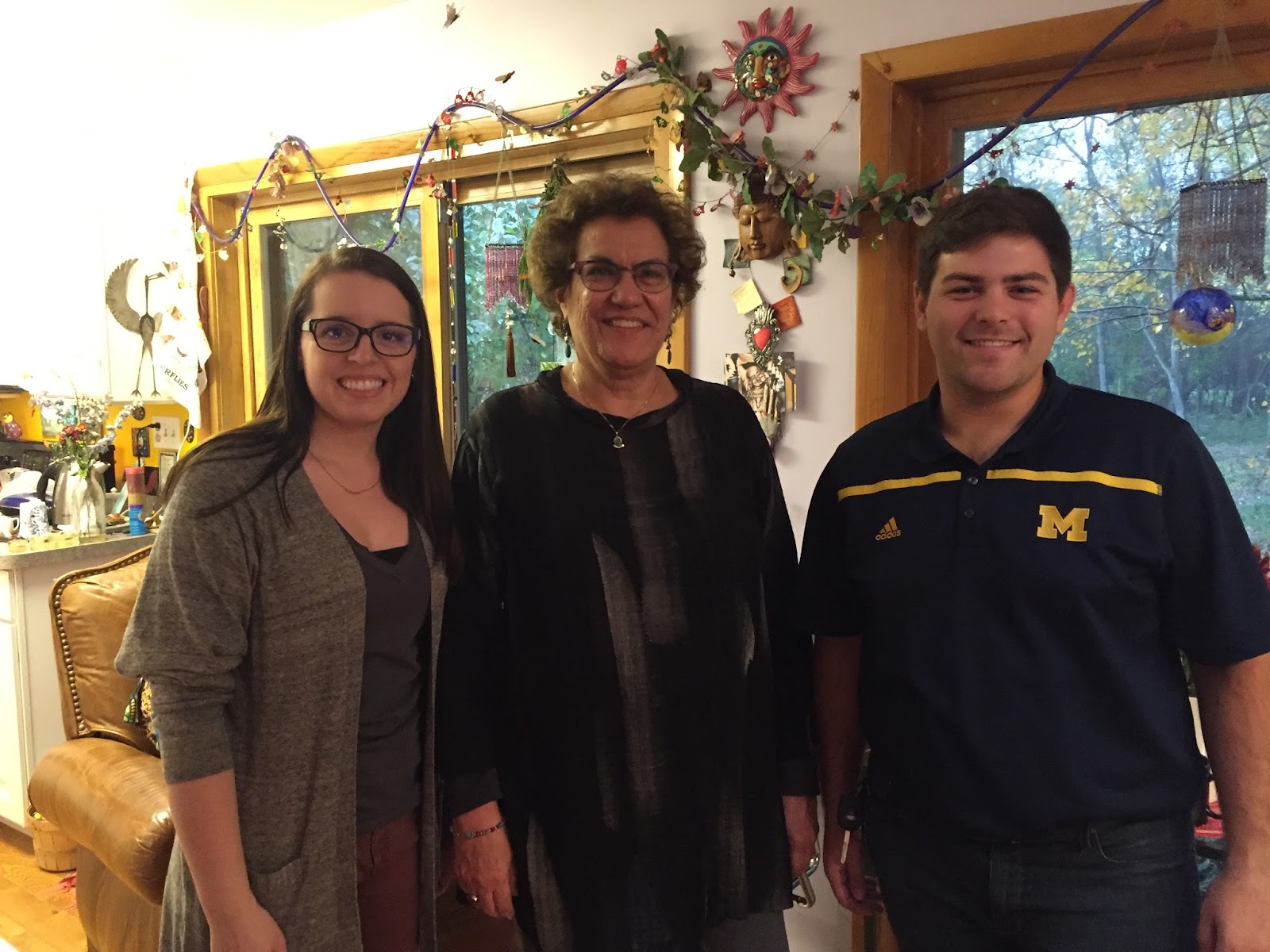 We’re looking forward to editing the video down into more manageable pieces. And we still have to go through and scan all of Ana’s archive, upload to medici, and tag everything. That will be interesting! The clip below is not an edited portion, just a random piece of the interview taken out to upload to youtube and give you all a preview.

Posted by Unknown at 7:49 PM No comments: